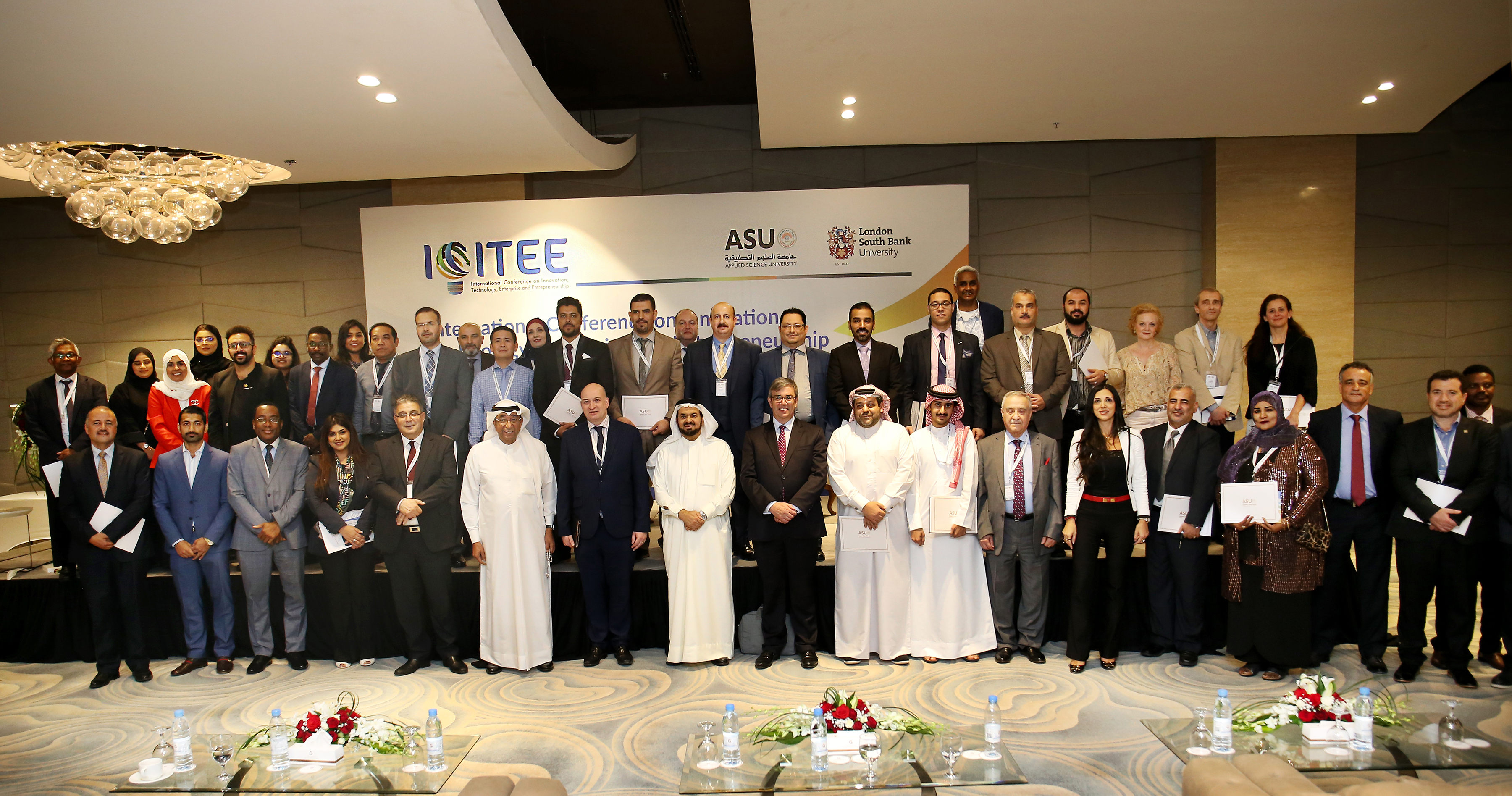 The International Conference on Innovation, Technology, Enterprise and Entrepreneurship (ICITEE) 2019 was held at the Grove Hotel and Conference Center, under the patronage of HE the Minister of Education and Chairman of the Higher Education Council in Bahrain, Dr Majid bin Ali A1 Nuaimi. The conference was organized by the University in association with London South Bank University (LSBU) with great partnership support from the Chartered Institute of Building (CIOB), the Association of Arab Universities (AArU) and sponsored by the media body’s Akhbar A1 Khaleeji; A1 Ayam; A1 Watan; A1 Bilad; The Daily Tribune; Daily News, BEnterpreneur Magazine in addition to the Palace Enterprise, The Grove Hotel and JD Ads & Events. The conference was attended by distinguished guests, scholars, researchers and practitioners who came all the way to Kingdome of Bahrain from 16 different nations.

This highly informative conference covered important subjects and themes related to innovation, technology and entrepreneurship including the future directions of Artificial Intelligence, Cloud Computing, Virtual and Augmented Reality and Building Information Modelling (BIM) amongst many other important areas.

69 papers from 130 researchers from 16 countries (Australia, Canada, United Kingdom, Italy, Spain, South Africa, Turkey, Kingdom of Saudi Arabia, Jordan, United Arab Emirates, Indonesia, Nigeria, Kuwait, Kazakhstan and Lebanon) were included in the peer refereed proceedings, and around 29 papers produced by colleagues from ASU, some are jointly with other institutions.

Furthermore, 200 participants attended the opening ceremony, where the conference was chaired by an opening speeches from Professor Ghassan Aouad, The University President and Professor Paul Ivey, Deputy Vice-Chancellor and Chief Business Officer, London South Bank University, United Kingdom. Followed with a speech delivered by HE Dr Abdul Ghani Alshuwaikh, Secretary General of Higher Education Council, representing the patron of the conference, HE Dr Majid bin Ali A1 Nuaimi, the Minister of Education. This continued with a welcoming speeches by the conference honorary chairs Professor Waheeb A1 Khaja, Chairman of the Board of Trustees, Professor David Phoenix, Vice Chancellor of London South Bank University And the honorary guest HE Professor Ezzat Salama, the Secretary General of Association of Arab Universities.

The conference also included the key note speakers Professor David Phoenix who explained about future directions of research and Professor Paul Ivey who highlighted on the topic of entrepreneurship. This was concluded with the Gala Dinner Speaker Professor Charles Egbu who emphasized on innovation.

This conference demonstrates our ability to attract researchers from across the globe and to run conferences of the highest quality. We should all be proud of what we have achieved in this truly international conference.

National Day Festival in the Ministry of Education